The infamous inquisition proceedings in 1679-94 shook up the entire town of Šumperk and its vicinity. In the cellar of the European Meeting House (Evropský dům setkávání), also called Geschader's House there is a permanent exposition, which documents these witch hunts. From a modern audio guidePORT™, you will hear the voice of the inquisitor Jindřich František Boblig of Edelstadt himself, who will guide you through the exposition. It is interesting to know that it was this very house where the family of Heinrich Pescke lived in the 17th century, who along with his wife Mary became the bravest victims of the wrath of the inquisitor Boblig. For more details you need to see the exposition…

Geschader's House is one of the stops on the “Witch Cycling Track” leading in the footsteps of witch hunts from Mohelnice through Šumperk to Zlaté Hory.

Tours last about 40 minutes. After paying the entrance fee, participants receive the audio guide system called guidePORT™, from which they can learn interesting things about the witch hunts of the 2nd half of the 17th century and about the exposition as well. The cellar system is built in such a manner that visitors can walk through it on their own and move from one room to another without a guide.

The creation of the Witch hunts exposition  was carried out under the project called “Via the Witch Cycling Track through the Czech-Polish border areas”.

This project was co-financed by the EU – European Regional Development Fund within the Operational Program of cross-border cooperation Czech Republic - Poland 2007-2013. 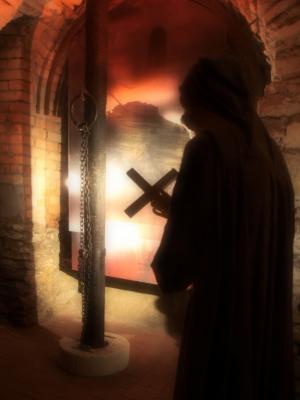