History of the Church of the Annunciation of the Virgin Mary

The Church of the Annunciation of the Virgin Mary was originally a part of the Dominican monastery, which was founded, according to the monastery chronicle, in 1293 by the Vyšehrad provost Jan. The entire monastery complex was built in the Gothic style. The church was damaged by fire in 1513, but Petr senior of Žerotín, the then owner of Šumperk, had both the church and the monastery repaired. However, his son Přemek converted to the Lutheran faith and expelled the Dominicans from the town, they returned to Šumperk only at the The Epoch after the Battle of White Mountain. In 1669, the church was damaged again by a great fire, which burnt almost the entire town down. The subsequent reconstruction of the church was in the Baroque style. In the 18th century, the lateral chapel of St. John of Nepomuk and the Czech Chapel were added. The first one was decorated with epic ceiling frescos by a painter from Uničov, Ignác Oderlický. The monastery was abolished in 1784 within the Josephian reforms and from then on the monastery building served mainly for the economic purposes of the townspeople. The church became dilapidated in the second half of the 20th century, although it was included in the list of cultural monuments in 1958, while the monastery became a permanent seat of a secondary health-care school. The church was in such a poor state in the 1980s that a radical reconstruction had to be performed. In the beginning of the 1990s, the church became a part of the newly established historical heritage zone of the town and intensive reconstruction modifications were initiated which were completed in 2005 and the total money invested into the repairs reached 35 mil. CZK. Nowadays, the church is deconsecrated and it serves for major cultural events, concerts, matriculations as well as high school and university graduation ceremonies.

Tour of the Church of the Annunciation of the Virgin Mary

Tour of the Church of the Annunciation of the Virgin Mary is an integral part of the guided tours. These walking tours take place from June to September every day and they begin every odd hour. Before the tour, go to the guide station, where you can buy the entrance ticket and souvenirs. You can find the guide station in the underground floor of the town hall building at the address Náměstí Míru 1 (entrance is from the side of the building, next to which there is the Plague Column). The last tour begins two hours before the end of opening hours.

Rental of the Church of the Annunciation of the Virgin Mary

The Church of the Annunciation of the Virgin Mary can be rented for a short term period for the purpose of holding cultural and social events, the theme of which is compatible with the interior of this Baroque church, for example classical music concerts,  matriculations and graduation ceremonies of high schools and universities, exhibitions etc. The church cannot be rented for purposes of wedding or funeral ceremonies.

You can book the church for holding a cultural event at least 30 days in advance by submitting an application for short-term rental of the church, which you can download here. To fill in the application, you need 602XML Filler, which is available here for free download. 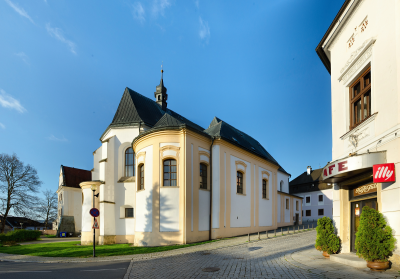