This house apparently belonged originally to the Dominican monastery. In the 16th century it was sold to private hands and since then a number of important citizen lived here. Jindřich Peąek was one of the most important housekeepers. He had inherited the secret of tripp (semi velvet) making from his father. It brought him a considerable wealth, which was one of the reasons why the inquisitor Boblig accused his wife of witchcraft. This courageous woman in silence endured all stages of torture. Later, under unbearable psychical constraint, she confessed because she had four children. After her death her husband Jindřich Peąek was arrested. After eleven years he died in prison, but not having confessed to witchcraft. The last owner of this house was a merchant Alois Geshader, who the house has been called up after up to present day. Since 1901 the house has been a town property. It was a museum and an archive until 1959. After a big reconstruction it was reopened with the title of European House of Meetings.
The building can be seen during a guided walk through the historical centre of the town „Walk from 13th into 21st century“. The walks start by the townhall on Náměstí Míru (square). During a summer they run daily except Saturdays every odd hour. In other time you must order the walk on Information centre. 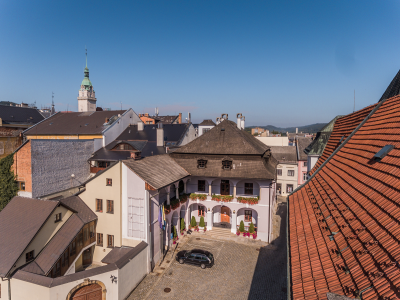